Novel approaches to measure the quality of gaits in horses

Locomotion studies of horses are useful for the detection of lameness at an early stage and for the selection of the first-class horses for breeding. By using the EquiMoves system with the ProMove-mini wireless IMU sensors, the quality of gaits can be measured in a flexible and objective way.

A study (French version here) was made by a research project based in Switzerland, having the Swiss national stud farm of Agroscope, the Swiss Franches-Montagnes breeding federation and the Universities of Bern, Zurich, and Utrecht, as partners. The Franches-Montagnes horses were equipped with ProMove-mini sensor nodes and reflective markers from a high-speed motion capture camera for kinematic analysis. The aim was to validate the sensor nodes as a measurement alternative to high-speed cameras, which can then be used outside laboratories for field tests. 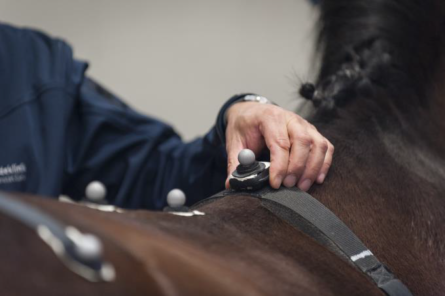 Reflective markers were positioned over some of the IMU sensors to assess the agreement between the high-speed motion capture system and the IMU system.
Copyright: Ernst A. Kehrli/ VetcomUZH

The HORSE presents a study in which the EquiMoves system was used to track the motion of seven healthy Warmblood horses. The data coming from the sensors was compared with the gold standard high-speed motion tracking cameras, with reflective markers placed on the cannon bones for motion capture. The conclusion was that the data coming from the IMUs, processed by application-tailored algorithms, was consistent with the data from the motion capture system. The research continues with the goal of validating the complete system of 8 IMU sensors.